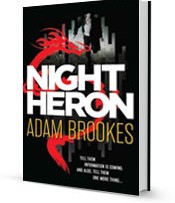 At last, an espionage thriller set in China that works. With Night Heron, former BBC China correspondent Adam Brookes has produced a masterful debut novel. It has all the hallmarks of a great page-turner, but with a richness of detail that feels authentic. There are a prisoner escape, an unwitting conduit between the prisoner and the British Secret Intelligence Service, and competition between British and U.S. spy agencies that doesn’t feel obligatory. The richly textured picture of modern Beijing is a bonus. You will be captivated by it all. This is the must-read thriller of the year.