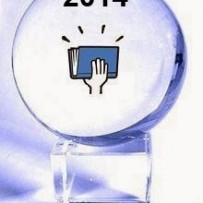 What does 2014 hold in store for ebook authors, publishers and readers? Today I bring you 14 book publishing industry predictions.

1. Big publishers lower prices – Back in 2009, one of my first posts for Huffington Post was a call for publishers to introduce $4.00 ebooks. Self-published (indie) authors heeded the call, but publishers did not. Until recently, it was rare to see a traditionally published book priced under $4.00. Why? Traditional publishers have fought tooth and nail to maintain higher ebook prices for fear that low-priced ebooks would cannibalize print sales, harm their profitability, and establish unrealistic consumer expectations of the worth of a book. By maintaining high ebook prices, they surrendered the sub-$4.00 market for ebooks to indie authors, which indies readily exploited. The results of our 2013 ebook pricing survey released in May illustrated the competitive advantage of low pricing. The survey found that books priced $2.99 and $3.99, on average, received about four times as many unit sales as books priced over $7.99. For indies who could publish low-priced books that were as good or better than what New York was publishing at higher prices, they were able to out-sell and out-compete the books from the large publishers. For much of 2013, it wasn’t uncommon to see indies holding up to half of the top 10 bestseller slots at major retailers on some days.

Big publishers have taken note. In 2013 big publishers began competing more aggressively on price, primarily in the form of temporary price promotions. In 2014 these price promotions will give way to a new normal of lower regular prices. Discounting is a slippery slope. Once customers are conditioned to expect big-name authors for $3.99 or less, the entire industry will be forced to go there.

Read the rest of the predictions on The Huffington Post:
http://www.huffingtonpost.com/mark-coker/2014-book-publishing-indu_b_4533411.html